Reuben Shalome on How I Started - Revolution Creative 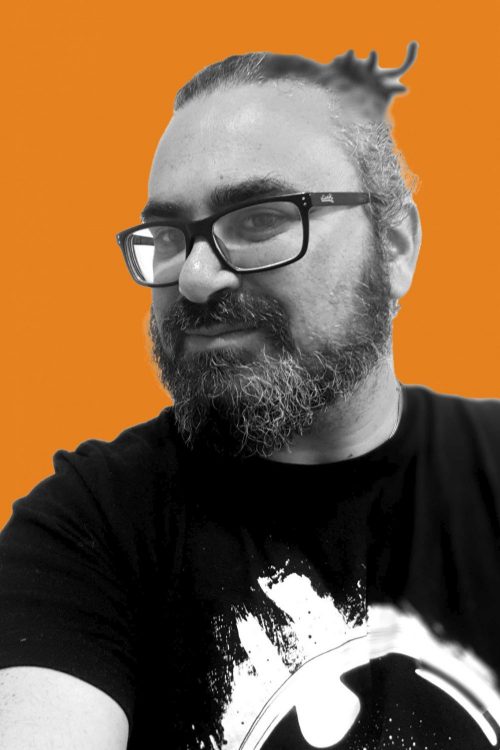 Reuben Shalome on How I Started

UK born, I left England in 1998, having just spent a year working on a factory line for Estee Lauder. I had become the Master of the ‘Twist and Screw’. Quick hands don’t save lives, they merely get employment doing mundane tasks.

Previously, I had wasted my last years at university attending one too many parties and simply not working hard enough. It’s funny considering my primary school teachers had already sussed this particular character trait, often writing in report cards, “Has talent but must apply himself more”. I was also suffering from imposter syndrome. Not surprising considering my peers were all high achievers and supremely talented. One even went on to become an illustrator for Marvel and DC Comics.

Fast forward six years spent ‘wasting my life’ travelling around Asia. With the encouragement of my future wife, I re-entered study in Whanganui, New Zealand. Full time on a Post Grad course for Design. This time it was different. This time I was paying the exorbitant international student fees. I had a vested interest in making every penny count. If I wanted to begin my career, I needed to upgrade and learn some computer skills! When I had left the UK, Magic Markers were king and all work was completed on a drawing board. If I wanted lettering, I had to burn it onto paper using Letraset. If I wanted that to be coloured, I had to switch on the Omnicrom machine. Ray Gun magazine was my bible and the photocopier my best friend. Within six years everybody was using the Adobe Suite. I would be 32 come graduation. Where most people my age had already established a reputation at some fancy design studio, or worked large at an advertising agency, all I had was a dodgy portfolio of poorly designed scribbles.

My first job was through somebody I knew at the Student Union. She gave me free reign over designing the student magazine. A part-time gig with no budget or expenses. I supplemented my income with freelance work designing websites or terrible logos.

The pay didn’t make for much of a living so we moved to where my wife could work. Masterton. If Whanganui was cheap low paid and hard to find graphic design roles, Masterton was the arse end of Dead Town. I accepted a short contract to work in pre-press for a large printer in Wellington. Turns out my eye for detail wasn’t too accurate. It would take many years before I could claim this skill. I hated everything about this job. One mistake after another. The company culture dragged me down. The three hour round trip killed me. The micro-management destroyed my self-respect. There was no creativity. When they offered me a second chance with an extended contract, to give me an opportunity to improve, I just couldn’t do it and declined.

In Masterton I hit my all-time low. I took on three jobs including stacking shelves at The Warehouse. A fancy design studio was the furtherest thought from my mind. There was no freelance work either. I slumped into a funk and felt like giving up design altogether.

It was tough. With every move, I had applied for 40-50 jobs before landing a role. I had bounced from city to city in search of work and been willing to uproot at a moment’s notice. Finally in Auckland I found a job working for Amcor Kiwi Packaging, again as a Mac Op in pre-press. This time felt different. It was more of a team. The culture was one of mutual respect and camaraderie. People helped out instead of sniping and passive aggressive behaviour. My role was to place graphics on cardboard boxes. Occasionally I would recreate a low-resolution jpg graphic into vector form. Nothing too ground breaking or strenuous. But I was happy.

In 2007 I headed south to Nelson having landed a job with a timber company. Success at last! This time my wife followed my work. Soon a child was on his way and uprooting was to become a more difficult equation. As the economy tanked, so did the staff numbers. Soon we were all doing the work of several people. As one colleague after another was made redundant, the atmosphere at work changed. It became a dog-eat-dog culture. The brightest and best managed to move on to bigger roles and once again I had that feeling of being trapped. I had six managers in the space of a year, each proclaiming the marketing department was unworkable and there wasn’t enough money to spend. What began as a 12 person team had dwindled to three by the time I left.

But what of the work? After all, this is supposed to be a piece about working as a graphic designer. But you see, it’s hard to create when the environment is run like a mini despotic regime. It matters little about the work if you’re not enjoying yourself or are unsupported. I found out that company culture is everything. No matter how much the pay, if every day is a battle immersed in the tedium of clock watching, or spent complaining and hating being there, then how can anybody maintain a level of creativity? The secret to great design wasn’t struggle or unhappiness. It was inspiration. It was team work. It was being content.

A decade has passed since I took on the Nelson job. I’m now happy in Christchurch working for a great company within the rural sector. My day-to-day work varies immensely. This is a very large scale corporate by New Zealand standards. With over 700 employees, 70 stores nationwide, a fleet of cars, ships, aeroplanes and loaders, three large plants and a lab all serviced by one graphic designer! I help put together artwork for shows (Mystery Creek Field Days is our largest) and conferences. Posters for stores. Brochures across several departments, annual reports, scientific reports and one high end magazine. I’ve helped with a major re-brand project that rolled out over the course of three years. My role has also expanded. Encouraged by my peers, I handle large scale projects such as store signage / wayfaring nationwide. I work closely with other design agencies to deliver artwork for our company. There’s more admin and more stakeholders to please and more responsibility. Creativity is no longer my be all and end all. I have other outlets to express my creativity. Other projects I do on the side.

To me, my career roadmap has been a journey about personal growth. I never envisioned I would work for a corporate managing multiple projects and stakeholders. I always saw myself more as a Shepard Fairey, fighting the system from within and doodling funky characters in bright colours. If I had any advice for anybody entering the industry, it would be don’t worry, you’ll find your niche eventually, no matter how long it may take. And it’s never too late to start.